Lillie Mae Jones was born on May 16, 1929 in Flint, Michigan and was surrounded by the music of the church growing up as her father was the musical director at their local church. Betty’s mother was a religious woman who felt Jazz was the ‘devil’s music’ though Betty was influenced by her in that she was an active member of the NAACP throughout her life. Carter studied music at the Detroit Conservatory of Music as a teen and knew early on she wanted to be a Jazz singer. As for developing her unique style as a musician that happens to sing Betty says “When we came up, we knew that we had to become a musician or a better singer or a better horn player, and that’s what we worked toward. We wanted musicians to like what we were doing as singers, so that they would want to play with us and accompany us and…that made us feel like we were contributing something.” Carter got to sit in with such bebop artists as Charlie Parker, Dizzy Gillespie and local piano players Barry Harris and Tommy Flanagan and this influenced her early on.

Lionel Hampton came to Detroit on tour in 1948 and after hearing Betty, hired her to sing in his band. When Carter was twenty one she visited New York with Hampton’s band and decided to stay. In the 1950s Betty recorded with King Pleasure and Ray Bryant’s trio and released her first albums as a leader in 1958 called ‘Out There with Betty Carter’ and ‘I Can’t Help It’. Also in the late 1950s Betty toured with Miles Davis and Ray Charles. At this point in her career Betty was very highly regarded by Jazz musicians and true fans but still did not receive the star recognition she deserved. In 1961 she recorded the tune ‘Baby, It’s Cold Outside’ with Ray Charles and this brought her national attention but not so much for the qualities that made Carter such an important artist in Jazz. In the 1960s Betty spent a lot of time with her family though she did release two albums; ‘Round Midnight’ in 1961 and ‘Inside Betty Carter’ in 1964. Carter also toured internationally with Sonny Rollins during this time.

Betty wanted to focus on her family in the early 1960s but she came back at the end of the decade ready to push her music ahead and recorded the album ‘Finally’ in 1969. Carter felt the record companies were too suffocating of her vision and decided to start her own label in 1969 called Bet Car Records. In the 1970s Jazz was in decline as Rock and Roll now fully replaced Jazz as the ‘devil’s music’ and it became more difficult to sustain a living performing. This only inspired Carter more so to always give her best at every performance and still was able to perform consistently and due to her amazing performances she was becoming the headline at concerts because she was such a tough act to follow. Some of the albums Betty recorded in the ’70s include ‘The Betty Carter Album’ in 1972, ‘Now It’s My Turn’ in 1976 and ‘The Audience with Betty Carter’ in 1979 which many regard as her best work. Also in the late ’70s Carter performed on Saturday Night Live and at the Newport Jazz Festival in 1977 and ’78. She continued strong in the 1980s recording ‘Whatever Happened To Love’ in 1982 and ‘Duets: Live at the Great American Music Hall’ in 1987 with Carmen Mc Rae. In 1988 finally a major record company, Verve, picked her up and re-released most of her albums on her own label and helped them reach a much larger audience. Coincidentally, Carter also won a Grammy Award in 1988 for her album ‘Look What I Got’.

Carter continued making music into the 1990s with albums ‘Feed The Fire’ in 1993 and ‘I’m Yours, Your Mine’ in 1996. In 1997 President Clinton presented Betty with the National Medal of the Arts which she considered her most important award. Betty Carter passed away in 1998. In 1999 Carter was elected into the Down Beat Jazz Hall of Fame. Carter leaves a legacy of one of the greatest Jazz singers and really defines the difference between an artist and an entertainer when it comes to the voice. I hope Betty’s music continues to inspire vocalists coming up today to be themselves, master their craft and take chances so we can have more wonderful artists like Betty Carter.

“Jazz is not a nice word today because jazz doesn’t make money quickly, a lot of people in power are not encouraging young people to really use the word `jazz’. For a person who’s been out here as long as I have, they’re pretty much sick of me because I just won’t go away. I’m not going away, see, that’s what probably bothers a lot of people. There’s a lot of young singers who are coming up, and [record executives] hope that they will replace the idea of jazz being what I have in mind with what THEY have in mind. But until I go away, that’s not going to happen, because as long as I’m around, I may be a thorn in some of the business peoples’ sides who want to interpret the music another way for them to make money more quickly. They discourage these young girls, young singers, from dealing with this music called jazz — don’t improvise, sing it straight, or sing it like somebody else has done it, or be like someone else. We have a lot of African-American singers who sing the gospel, who come directly out of a church, and they have these big, wonderful voices, and they know how to program these young ladies, and they tell them they’re going to make a whole lot of money if they sing this way instead of that way. In fact, the young singers, most of them don’t even know what my singing is like. They don’t have any idea what jazz is. Until they maybe hear me one day and then they’re surprised. But it’s too late for them then, they can’t just change automatically and say I’m going to try to be like that.” – Betty Carter 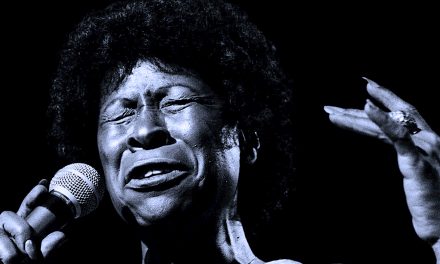