George Lewis (1900-68) was the most famous New Orleans clarinetist on the scene in the 1950s, at least until Pete Fountain emerged later in the decade.

A veteran of the Bunk Johnson band of the 1940s and a fixture in the Crescent City for decades, the soft-spoken clarinetist became unexpectedly famous by 1952 and was soon traveling the world playing the simple but effective New Orleans standards, blues, stomps and ballads that he loved.

His most famous original was “Burgundy Street Blues” and he is shown here playing a definitive version with backing by pianist Joe Robichaux, bassist Alcide “Slow Drag” Pavageau, and drummer Joe Watkins sometime in the early-1960s. 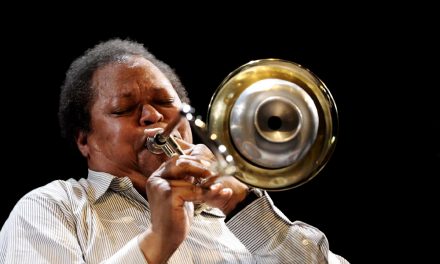