A birthday tribute to the famous trumpeter and bandleader

Trumpeter and bandleader Harry James was born on March 15, 1916 in Albany, Georgia.

He began playing drums at seven and at eight started taking trumpet lessons from his father who conducted bands for traveling circuses.

By the time he was 12, James was leading one of the bands for the Christy Brothers Circus.

A brilliant trumpeter from an early age, as a teenager during 1931-35 he worked with several territory bands in Texas, being discovered in 1935 by drummer Ben Pollack.

James made his recording debut with Pollack’s big band in 1936 and in Jan. 1937 (when he was 20) became a star soloist with the top swing band in the world, Benny Goodman’s orchestra.

After two years with Goodman which made him famous, James formed his own big band which struggled a bit for two years before hitting it big in 1941 with the trumpeter’s version of “You Made Me Love You,” followed in the next few years by such hits as “I Don’t Want To Talk About You,” “I Had The Craziest Dream” (the latter two featuring singer Helen Forrest), “Cherry.” “I’m Beginning To See The Light,” and “It’s Been A Long Long Time.”

Harry James, whose orchestra included a string section and who married the glamorous movie star Betty Grable, had the #1 band in the swing world after Glenn Miller broke up his group in 1942; James was a national celebrity who appeared in many films (always playing a number or two with his orchestra) including Private Buckaroo, Bathing Beauty, If I’m Lucky, Springtime In the Rockies and Best Foot Forward.

The numerous commercial hits led to many jazz listeners underrating James’ jazz playing but, when inspired, he could hold his own with the best trumpeters, even embracing bebop a bit during 1947-49.

Famous throughout his life, Harry James led a big band for decades that could swing like Count Basie’s (James used some of their arrangements), he regularly trotted out remakes of his hits for his fans, and he worked as often as he liked into the 1980s.

Here is Harry James demonstrating his impressive technique on “Concerto For Trumpet” from 1942. 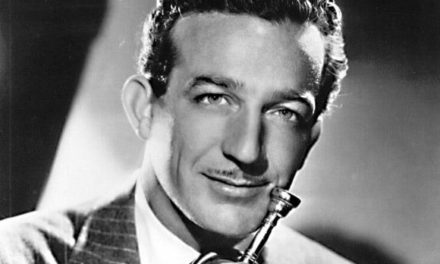