Composer, pianist, and bandleader Carla Bley (born Carla Borg) was born on May 11, 1936 in Oakland, California.

At 17, working as a cigarette girl at Birdland, she met and married pianist Paul Bley who encouraged her to apply her keyboard skills to composing.

Her talent was quickly recognized by George Russell, Jimmy Giuffre, and Bley himself who recorded her early compositions.

In addition to her large body of creative work, Bley has been involved in helping found many important musician collectives and support organizations.

George Russell recorded her original number “Bent Eagle” for his 1960 album “Stratusphunk” and her husband released “Barrage” an LP consisting entirely of her works.

She organized the Jazz Composers Guild in 1964 bringing together New York’s best and brightest, co-leading the “Jazz Composers’ Orchestra” with Michael Mantler.

Of her recordings among the most popular is the jazz opera “Escalator Over The Hill” released on three LPs produced between 1968 and 1971.

In 1972 Carla Bley received a Guggenheim Fellowship award for music composition and continues to perform and record with her own big band throughout the world.

“Carla Bley and electric bassist Steve Swallow are featured playing a duet on her “Major,” performed in 2000. 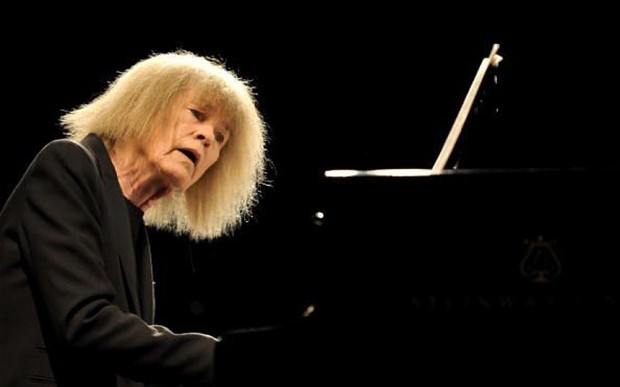