A tribute to the adventurous tenor-saxophonist

He switched to tenor-saxophone while in high school and as a teenager he played with many of the traveling acts who were passing through Little Rock including r&b bands such as that led by Junior Parker.

Sanders spent some time in Oakland, moving to New York in 1961 where he struggled for a few years and, other than some work with Sun Ra, he was in obscurity.

That began to change during 1963-64 when he recorded with Don Cherry, Paul Bley, and Sun Ra in addition to his own album for ESP where he shows a John Coltrane influence.

In 1965, Sanders began to play with his idol John Coltrane, displaying his own radical style on tenor which included screams, shrieks, roars and honks; he first recorded with Coltrane on his monumental Ascension album.

Sanders was a regular with Coltrane’s group during the second half of 1965 and in 1966 became a member of the new John Coltrane Quintet, often starting his solos where Coltrane left off and raising the intensity level to a remarkable level.

After Coltrane’s death, Sanders led his own records and had a surprise hit with “The Creator Has A Master Plan, a 30-minute performance that co-starred the yodeling of singer Leon Thomas.

While always showing a Coltrane influence within his own sound, Pharoah Sanders led a series of adventurous yet rhythmic recordings through the mid-1970s were popular.

He has since been heard in many settings, sometimes playing standards conservatively and at times taking the music completely outside. 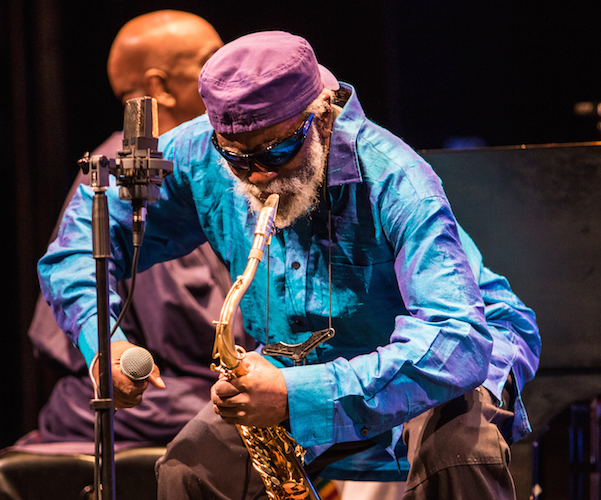