A birthday tribute to the creative trombonist

He attended Jersey City State Teachers College before moving to NYC in 1975 where he studied with Roswell Rudd, Grachan Moncur III. and Jimmy Knepper.

The trombonist freelanced, gaining important experience touring with the big bands of Lionel Hampton and Buddy Rich, and recording with Jaki Byard’s Apollo Stompers, in addition to working with salsa and top 40 groups and in Broadway pit orchestras.

After becoming a member of Makanda Ken McIntyre’s band, Swell began playing with the who’s of the New York avant-garde jazz scene, recording often since 1989 with over 50 CDs as a leader or co-leader and sideman appearances on over 125 other releases.

An expressive trombonist who sounds comfortable whether playing free improvisations or on more chordal-based music, Swell has a sound of his own along with a fluent and open-minded style.

In addition to conducting workshops and teaching special needs children in the NYC public school system, Swell has led such projects as Slammin’ The Infinite, Fire Into Music, Unified Theory Of Sound and Nation Of We.

Here is Steve Swell taking an inventive solo at the 2008 Hell’s Kitchen Jazz Festival in a trio with bassist Ken Filiano and drummer Andrew Drury. 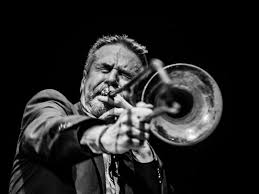