Two months after Johnny Carson retired and the Tonight Show Band led by Doc Severinsen was no longer on nightly television, Arnsenio Hall invited them to guest on his show of July 2, 1992.

The personnel is the same as it was on the Carson show and the spirit is certainly there as the band roars through an uptempo version of “Jumpin’ At The Woodside.”

Doc takes a trumpet chorus, Pete Christlieb is featured on tenor, drummer Ed Shaughnessy drives the band, and the ensembles are quite explosive.

There has not been a television big band on this level since. 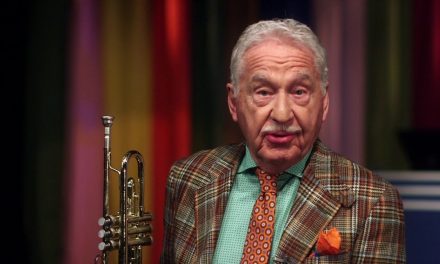