Miles Dewey Davis III was born on May 26, 1926 in Alton, Illinois. Miles’ mother was a blues pianist though she kept this hidden from him and his father a dentist. Davis began studying trumpet at the age of thirteen with local musician Elwood Buchanan and Buchanan would always stress to Miles to play without using vibrato which is one of the influences in his unique sound. Miles also cites Clark Terry as an early influence. By the age of sixteen Davis was playing professionally in the area with Eddie Randle’s band, the Blue Devils, and in 1944 Miles played with Billy Eckstein’s band in town for a week along side Charlie Parker and Dizzy Gillespie. While Davis could have left high school to begin his career it was very important to his parents he finished high school and continued his education at Julliard School of Music in New York City. Miles left Julliard after one year complaining their focus was far too centered around European Classical music or ‘white’ music though acknowledging the music theory he learned there was useful to him. Davis began performing with Coleman Hawkins and Eddie ‘Lockjaw’ Davis in several clubs on 52nd St. and recorded for the first time in 1945 with Herbie Fields.

In 1945 Dizzy Gillespie left his band with Charlie Parker and Miles became his replacement along with Max Roach, Al Haig and Curley Russell. Davis can be heard on Parker’s famous album ‘Now’s the Time’ already finding his unique voice in Jazz and foreshadowing what would come next in Jazz. On a West Coast tour with Parker, Miles did some work with Charles Mingus and they also shared an apartment for some time and Davis also toured with Billy Eckstein’s band which eventually brought him back to New York. In 1948 Davis began working with arranger and composer Gil Evans as well as Gerry Mulligan, John Lewis and Max Roach in effort to create beautiful music that wasn’t solely focused on instrumentalism as Bebop can be. Their work can be heard on the 1956 album ‘Birth of the Cool’ and heavily influenced what we know now as the Cool movement in Jazz. In 1955 Miles formed the first great quintet with John Coltrane, Red Garland, Paul Chambers and Philly Joe Jones. This band provided a perfect balance musically and some of their albums from this period include ‘Relaxin with the Miles Davis Quintet’, ‘Steamin with the Miles Davis Quintet’, ‘Workin with the Miles Davis Quintet’ and ‘Cookin with the Miles Davis Quintet’. In 1958 Davis added Cannonball Adderley to mix and the now famous sextet recorded the album ‘Milestones’ and shortly changed some of the members of the band with the addition of Bill Evans and Jimmy Cobb and recorded the album ‘1958 Miles’.

Also during this time period Miles worked again with Gil Evans on a series of albums including ‘Miles Ahead’ in ’57, ‘Porgy and Bess’ in ’58 and ‘Sketches of Spain’ in ’59. In 1959 Davis brought his sextet back into the studio and recorded ‘Kind of Blue’ which is regarded as a masterpiece and has sold over four million copies to date. In 1960 Coltrane left Miles to put together his own quartet and other members of the rhythm section went on their own paths by 1963. Davis quickly formed a new band though with George Coleman, Ron Carter, Tony Williams and Herbie Hancock and together they recorded the albums ‘Seven Steps to Heaven’ and ‘In Europe’ in 1963 and ‘My Funny Valentine’ and ‘Four and More’ in 1964. This group would play the same material as Davis’ first quartet but the music was much more intense and aggressive reflecting the turmoil in the 1960s. Coleman left in 1964 and Miles was able to pursued Wayne Shorter to leave Art Blakey and join him. With Shorter on tenor saxophone the second great quintet was formed. Some of the albums made by this group include ‘E.S.P.’ and ‘The Complete Live at the Plugged Nickel 1965’ in 1965, ‘Miles Smiles’ in 1966, ‘Sorcerer’ and ‘Nefertiti’ in 1967 and ‘Miles in the Sky’ and ‘Filles de Killimanjaro’ in 1968. Davis began using electric instruments on the albums in 1968, foreshadowing what would be next and by the time those records were done being recorded the band had changed with the additions of Chick Corea and Dave Holland.

Miles recorded ‘In a Silent Way’ in 1969 marking the new change in music and the beginning of the technological revolution with a band that included Hancock, Corea, Joe Zawinul, Shorter, Holland, John McLaughlin and Tony Williams. Shortly after Jack DeJohnette replaced Tony on drums and with the additions of Airto Moreira and Bennie Maupin ‘Bitches Brew’ was recorded and went gold by 1976. Davis recorded several live albums in the early ‘70s followed by ‘A Tribute to Jack Johnson’ in 1971 and ‘On the Corner’ in 1972. Miles would switch up band members often in the 1970s always searching for the right balance and chemistry and some other albums recorded in the 1970s include ‘Big Fun’ and ‘Get Up With It’ in 1974 and ‘Dark Magnus’, ‘Agharta’ and ‘Pangaea’ in ’74 and 1975. In late 1970s Davis took time off from music to recharge and enjoy certain aspects of life without constantly being on the road before making his return in 1979. Miles recorded ‘The Man with the Horn’ from ’79-’81 followed by the album ‘We Want Miles’. Some of the new members of Davis’ band from this time period include saxophonist Bill Evans, Marcus Miller, John Scofield, Al Foster, Mino Cinelu and Robert Irving III. Miles continued exploring new ideas in music until the end and some of his final albums include ‘Tutu’ in 1986, ‘Amandla’, ‘Doo-Bop’ and finally ‘Miles & Quincy Live at Montreux’ in 1991. Miles Davis passed away in September, 1991.

Davis leaves a legacy and influence so large in Jazz, American culture and music internationally it is even hard to describe. Miles is a cultural icon and even today his music and image still provokes a certain idea of individualism and greatness that one can only of dream of aspiring to. Just a few of the awards won by Miles include over ten Grammy Awards, star on the Hollywood Walk of Fame, Knighted into the Legion of Honor, Sonning Award for Lifetime Achievement in Music and inducted into the Rock and Roll Hall of Fame. Miles Davis’ music has touched the lives of millions of people in several generations and leaves a legacy unmatched by any musical performer of modern times. Miles Davis Lives!

“Do not fear mistakes. There are none.”

“I’m always thinking about creating. My future starts when I wake up every morning… Every day I find something creative to do with my life.”

“Sometimes you have to play a long time to be able to play like yourself.”

“I’ll play it first and tell you what it is later.” – Miles Davis 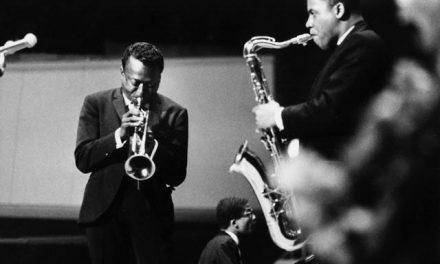