A tribute to the bandleader, arranger and trumpeter

A trumpeter from a young age, Wilson moved to Detroit when he was 16.

After some freelancing, in 1939 he became a member of the Jimmie Lunceford Orchestra (replacing Sy Oliver) where he took occasional trumpet solos and contributed such pieces as “Hi Spook” and “Yard-Dog Mazurka,” the latter an obvious inspiration for Stan Kenton’s “Intermission Riff.”

After serving in the Navy where he played with a band, in 1945 he settled permanently in Los Angeles.

Wilson had a big band for a couple of years and then freelanced, writing arrangements for Benny Carter, Dizzy Gillespie, Count Basie, and Duke Ellington (including a classic early 1950s chart for “Perdido) and for many singers.

In 1960, the Gerald Wilson Orchestra debuted and he kept his ensemble together for 54 years, recording regularly in the 1960’s for the Pacific Jazz label, having a hit with “Viva Tirado” (which was later recorded by El Chicano), and composing the classic “Carlos” which was his salute to a bullfighter.

The genial bandleader, who gave up playing trumpet after the mid-1960s, was always proud of his pioneering charts which often featured five-part harmonies.

Gerald Wilson continued leading and recording with his big band up until his death at age 96; his later work included fulfilling commissions to write special suites for the Monterey and Detroit Jazz Festivals.

Gerald Wilson’s famous arrangement of “Milestones” is featured on this film clip from 1965. 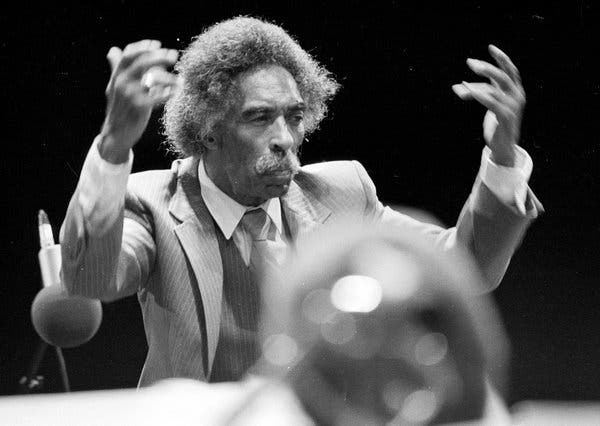