Trumpeter Carl Saunders was born on August 2, 1942, in Indianapolis, Indiana.

His uncle, trumpeter-guitarist Bobby Sherwood, was a bandleader in the Swing era and his mother Gail sang with his band, taking young Carl along during his first five years.

Saunders’ aunt married tenor-saxophonist Dave Pell; the recordings of the Dave Pell Octet with trumpeter Don Fagerquist had a major impact on the youth.

Carl Saunders began playing trumpet when he was 11 and at 18 he joined the Stan Kenton Orchestra, but on mellophonium rather than trumpet.

After a period working in Las Vegas (1972-84), Saunders moved to Los Angeles, became a permanent member of the Bill Holman Orchestra (playing lead), got busy in the studios, and worked with a wide assortment of top-notch jazz groups including Supersax, the Dave Pell Octet, Bob Florence’s Limited Edition, Gerald Wilson’s big band, the Phil Norman Tentet, and his own combo and big band.

A virtuoso who frequently hits very high notes quietly, can play fast lines with the blazing speed of an Arturo Sandoval during an endless breath, and a hard core bebopper, Carl Saunders has recorded a series of brilliant albums as a leader since 1995.

Because he has rarely toured, Carl Saunders is not well known outside of Southern California but very few trumpeters are on his level.

For evidence of that, here is Saunders showcased with the Stan Kenton Alumni Band (directed by Mike Vax) on “My Foolish Heart”; check out his chorus after the melody statement. 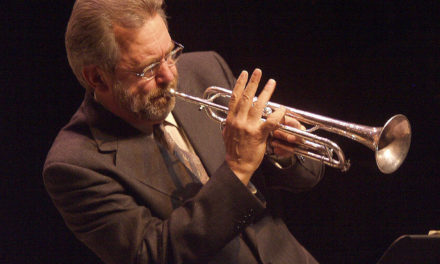