A tribute to the brilliant multi-instrumentalist

Trumpeter, saxophonist and flutist Ira Sullivan died on September 21, 2020 at the age of 89.

He was born May 1, 1931 in Washington D.C., starting on the trumpet when he was 3 ½; virtually everyone in his family (including his parents, uncles and aunts) played instruments.

Sullivan grew up in Chicago which would be his home base until 1962, and was largely self-taught on his instruments including the saxophones which he picked up during high school.

He considered Harry James an early trumpet influence but switched to bebop after hearing Charlie Parker.

Sullivan made his recording debut in 1953 with trumpeter Conte Candoli, played trumpet, tenor and alto on an album by trumpeter Red Rodney in 1955, and that year performed with Charlie Parker for a week in Chicago.

In 1956 he moved to New York during a seven-month period as a member of Art Blakey’s Jazz Messengers but he did not like traveling and left the band to return to Chicago.

After leading several albums of his own and recording with Rahsaan Roland Kirk and Eddie Harris, in 1962 Sullivan moved to Florida where he played locally, adding the soprano and flute.

While content to be a local legend and play with top local artists (including Jaco Pastorius and Pat Metheny), he began to re-emerge on the local scene in 1977 when he recorded with Red Garland and Philly Joe Jones.

In 1980 Sullivan began teaming up with his old friend Red Rodney in a quintet that was surprisingly modern with pianist Garry Dial leading the rhythm section; the interplay between Rodney and Sullivan during the next two years revitalized both of their careers.

During his final 38 years, Ira Sullivan regularly emerged from his quiet life in Florida to play in Chicago with stimulating modern players, always challenging himself and amazing others with his equal dexterity on brass and reed instruments.

Here is Ira Sullivan in 2017 when he was 86, playing trumpet on “Nica’s Dream” in Florida with a fine local group that also includes tenor-saxophonist Marc Berner, guitarist Brev Sullivan, bassist Jamie Ousley, and drummer Emily Maddox. 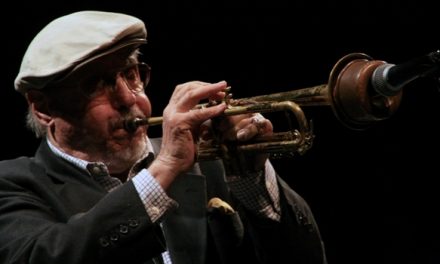