The young tenor stretches out on a standard

An inventive tenor-saxophonist who was born and raised in Chile, Melissa Aldana started on alto but was inspired after hearing Sonny Rollins to switch to tenor.

She attended the Berklee School Of Music during 2005-09, began recording as a leader in 2010, and won the Thelonious Monk International Jazz Saxophone Competition in 2013 when she was 24.

While she could sound close to Sonny Rollins at times when she was heading her pianoless trio, she has always had her own ideas in her playing while developing a personal sound and has continued evolving since that time.

This performance of “Without A Song” from 2017 with bassist Pablo Menares and drummer Craig Weinrib starts out like Sonny Rollins but uses that as a point of departure as Aldana stretches out in creative fashion during a solo that never runs out of interesting twists and turns. 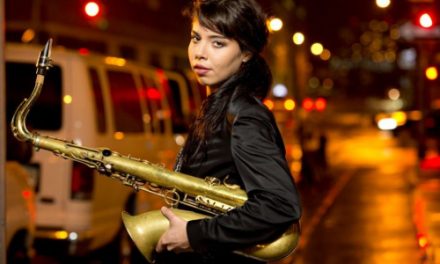