The immortal pianist, at 80, playing a touching ballad

Oscar Peterson (1925-2007) was one of the greatest pianists of all time, a brilliant virtuoso who could outswing all of his competitors.

A significant player by 1945 and a household name by the early 1950s, Peterson was on hundreds of records and performed at thousands of concerts during his 60-year career.

In 1993 Peterson suffered a stroke that put him out of action for two years and permanently weakened his left-hand; his health gradually declined during his final 12 years although he toured as often as he could.

Here is Oscar Peterson at the age of 80 in 2005, playing an uplifting version of the ballad “You Look Good To Me” with his last group, a quartet with guitarist Ulf Wakenius, bassist Niels-Henning Orsted Pedersen and drummer Alvin Queen.

Even though he was largely a one-handed pianist during his last period, Peterson still displays his musical genius during this memorable performance. 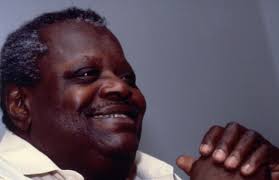