If you’re already a “Jazz on the Tube” subscriber, please share this video with friends. Thanks.

“He was the most New Orleans of all the New Orleans acts that are still living,” said Mid-City Lanes owner John Blancher.

Even in a city and musical community known for eccentric characters, Mr. Eaglin stood out. Extremely private, he lived with his family in St. Rose. For many years, he refused to perform on Friday nights, reportedly because of religious reasons.

The digits on Mr. Eaglin’s right hand flailed at seemingly impossible angles as he finger-picked and strummed a guitar’s strings. A set by the so-called “Human Jukebox” could range from Beethoven’s “Fur Elise” to Bad Company’s “Ready for Love.”

He thrived on feedback from onlookers, gleefully took requests and challenged his musicians to keep up. Utterly unselfconscious, he would render fellow guitarists slack-jawed with a blistering run, then announce from the stage that he needed to use the bathroom.

Photo by Keith I. Marszalek / nola.comSnooks Eaglin’s fingers, hard at work during the 2008 Jazz Fest.

Mr. Eaglin was born Fird Eaglin Jr. in 1937. As an infant, glaucoma robbed him of his sight. He earned his “Snooks” nickname after his mischievous behavior recalled a radio character named Baby Snooks.

As a toddler, he received his first instrument, a hand-carved ukulele strung with rubber bands. As a boy, he learned to pick a guitar to songs on the radio. He attended the Louisiana School for the Blind in Baton Rouge. By 14, he had dropped out to work full-time as a musician.

His first steady job was with the Flamingos, a popular seven-piece rhythm & blues band that also included a young Allen Toussaint on piano. Post-Flamingos, Mr. Eaglin briefly billed himself as Lil’ Ray Charles. In the late 1950s, he performed on street corners and recorded two acoustic albums for a folk label. His studio work included the guitar parts on Sugarboy Crawford’s “Jockamo.”

In the early 1960s, Mr. Eaglin released a handful of singles for Imperial Records under the name “Ford” Eaglin. He logged three years in the house band at the Playboy Club off Bourbon Street.

After the British Invasion decimated the market for New Orleans rhythm & blues, he semi-retired. The launch of the New Orleans Jazz and Heritage Festival in 1970 brought with it fresh opportunity.

Photo by Keith I. Marszalek / nola.comSnooks Eaglin, foreground, with bassist and frequent collaborator George Porter Jr. during the 2008 Jazz Fest.

In 1987, Mr. Eaglin released “Baby, You Can Get Your Gun!,” his first album on Black Top Records. Several more well-received albums on Black Top further heightened his profile.

His annual appearances at Jazz Fest were hugely popular. In addition to legions of local fans, Mr. Eaglin’s admirers included prominent musicians from around the globe.

It was Robert Plant, in fact, who first made Blancher aware of Mr. Eaglin.

In 1990, not long after he took over the Mid-City Lanes, Blancher received a call from Plant, who wanted to throw an after-party at the bowling alley. He asked Blancher to book Mr. Eaglin, whom he met years earlier when the guitarist performed at a party in New Orleans for Plant’s former band, Led Zeppelin.

The after-party didn’t happen, but the Mid-City Lanes became Mr. Eaglin’s preferred venue. He played as frequently as once a month.

“He’s an irreplaceable guy,” Blancher said. “More celebrities came to see Snooks than anyone. His reputation was as big as anyone’s in New Orleans. And he wouldn’t travel, so if you wanted to see Snooks you had to come to Rock ‘n Bowl.”

During the 2000 Jazz Fest, Bonnie Raitt showed up at the Mid-City Lanes to hear Mr. Eaglin. He exclaimed from the stage, “Listen to this, Bonnie! You gonna learn something tonight, girl!” She later lent a hand by replacing a broken string on his guitar.

Photo courtesy of John BlancherBonnie Raitt swaps out a broken string on Snooks Eaglin’s guitar at the Mid-City Lanes Rock ‘n Bowl in 2000.

Blancher would often pick up Mr. Eaglin in St. Rose and drive him to and from shows at the Rock ‘n Bowl. Along the way Mr. Eaglin regaled him with stories.

Among the most infamous is the time Mr. Eaglin drove the Flamingos home following a Saturday night gig in Donaldsonville. The musicians were so intoxicated that they decided their blind guitarist was the most qualified driver.

Mr. Eaglin claimed he navigated the curves of the road from memory. The crunch of gravel under the tires warned him when the ’49 Studebaker strayed onto the shoulder. The story concludes with Mr. Eaglin pulling up to his house early Sunday morning and his mother suggesting the musicians proceed directly to church.

Mr. Eaglin met his future wife, Dorethea “Dee” Eaglin, at a Flamingos gig during Mardi Gras 1958. They married in 1961 and she became his constant companion and confidant. Dee would sit nearby as her husband performed.

Blancher was among the few music industry figures that Mr. Eaglin allowed to visit his house. But even he was unaware of the guitarist’s deteriorating health. Blancher learned in January that Mr. Eaglin had been battling prostate cancer.

Mr. Eaglin last performed at the Mid-City Lanes in July. Blancher spoke to him recently about booking a show in March. “He said, ‘I’m going to wait until Jazz Fest. I’m not going to do any gigs until then,'” Blancher said. “I was surprised by that.”

Mr. Eaglin checked into Ochsner Medical Center last week. With regret, he told his step-daughter, Carolyn Gioustover, “I’ve got to call Quint Davis and tell him I won’t make it to Jazz Fest.”

He went into cardiac arrest on Tuesday.

Mr. Eaglin often said his mother took care of him until Dee took over. He died on his mother’s birthday.

That cat can play anything”

Making of “Walking Through Heaven’s Gate” 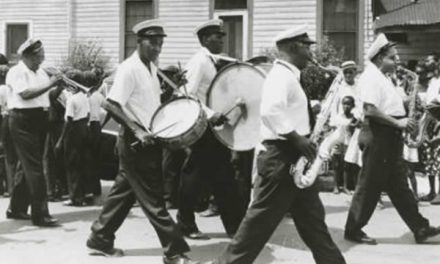