This was part of the Conspiracy Of Hope Tour, a fundraiser for Amnesty International at Giants Stadium, a football stadium across the Hudson River from Manhattan.

I think Miles got a kick out of being in front of a football stadium crowd in the US. Probably the one and only time in his life.

Born in Mexico, Carlos Santana settled in San Francisco where he started out as a blues guitarist. He was a devotee of the music of John Coltrane, Miles Davis and others and this must have been a thrill for him too.

Rolling Stone magazine out Santana at number 20 on their 100 Greatest Guitarists of All Time list. It’s a magazine-promo trick to rank musicians, on the other hand, not a bad call. 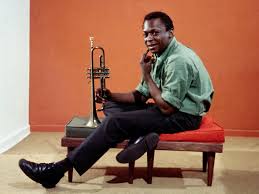