Early on he played trombone, tuba and drums in a school band before teaching himself the trumpet.

At 14 he worked with the Young Family Band (which included Lester Young) and he also performed with Eagle Eye Shields and Alonzo Ross’ De Luxe Syncopators before moving to New York in 1928.

After recording with James P. Johnson and having brief associations with Chick Webb and the Fletcher Henderson Orchestra, in Feb. 1929 Williams joined Duke Ellington as the replacement for Bubber Miley.

Williams, a master of the plunger mute who could also play open in a style influenced by Louis Armstrong, was a major soloist for Ellington (including on “Concerto For Cootie”) for 11 years, also leading a few sessions of his own.

In Nov. 1940, Cootie Williams surprised the swing world by accepting a lucrative one-year contract to join Benny Goodman where he was a key star with both the orchestra and Goodman’s sextet.

After the year passed, he formed the Cootie Williams Orchestra which played regularly at the Savoy Ballroom, became the first to record two Thelonious Monk songs (“’Round Midnight” and “Epistrophy”) and featured such soloists as pianist Bud Powell, altoist-singer Eddie “Cleanhead Vinson and tenor-saxophonist Eddie “Lockjaw” Davis.

While he had a hit with a feature for the honking tenor of Willis Jackson (Gator”), Williams was mostly in obscurity in the 1950s, leading small groups in out-of-the-way New York locations.

In 1962 after a 22-year “vacation,” Cootie Williams rejoined Duke Ellington’s orchestra where he regained his old prominence, staying with the band past Duke’s death in 1974 until his retirement a couple of years later.

Here is Cootie Williams with Duke Ellington in 1969 at Duke’s Second Sacred Concert, being showcased on a bluesy number that shows off his expertise with tonal distortions and the plunger mute. 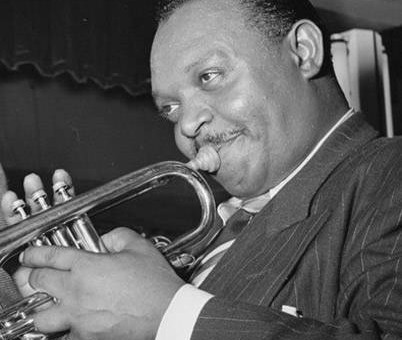