A tribute to the legendary 1920s cornetist

When he was four, Beiderbecke began picking out songs by ear on his family’s piano and was soon thought of as a child prodigy, but he did not learn how to read music very well until he was in his twenties, instead improvising and “improving” the classical pieces he was given to practice.

At 15 when he heard the Original Dixieland Jazz Band’s recording of “Tiger Rag,” he purchased a cornet, developing quickly.

By 1922 he was freelancing in the Midwest, impressing many with his beautiful tone and adventurous ideas.

He was a member of the Wolverines during 1923-24, making his recording debut with the group in 1924, creating thoughtful and advanced solos with a cool tone and a restrained style that was quite heated just below the surface.

After a brief and abortive stint with Jean Goldkette’s band in New York (Bix’s poor reading abilities resulted in him being fired), he freelanced in 1925 and greatly improved his sight-reading under the guidance of C-melody saxophonist Frank Trumbauer.

Beiderbecke became the star of Goldkette’s orchestra during 1926-27 with 1927 being the highpoint of his career, a year that included classic recordings with Trumbauer (including “Singin’ The Blues” and “I’m Coming Virginia”), his own Dixieland-oriented recordings (as Bix and his Gang), sessions with Goldkette, a solo piano recording of his impressionistic “In A Mist” (one of his four piano pieces), and being hired by Paul Whiteman for the very popular orchestra.

While the job with Paul Whiteman was prestigious, by then Beiderbecke was an alcoholic and his drinking (possibly of some poisoned liquor) led to him going downhill during 1928-29, collapsing on September 13, 1929 and having to leave the band.

Beiderbecke tried to make a comeback during 1930-31 and made a few final record dates, but he died on August 6 1931 when he was just 28, a living legend whose fame and influence has steadily grown since his passing.

Here is a recording of Bix Beiderbecke and a pickup group called the Rhythm Jugglers playing his “Davenport Blues” on January 26, 1925. 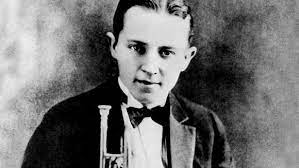