A birthday tribute to the innovative altoist

Visit the Jazz on the Tube Ornette Coleman Archive

Originally a tenor-saxophonist, Coleman played locally in r&b and bop groups and was influenced by Charlie Parker but always seemed to have his own approach to improvising.

He left New Orleans, touring with various r&b shows, but was often criticized and once actually assaulted for his emotional and fairly free playing in the early days.

Coleman switched to the alto and worked with Pee Wee Crayton’s group, leaving the band in Los Angeles where he lived for much of the 1950s, working day jobs (including as an elevator operator) while developing his unique music.

Over time, Coleman met other musicians who were open to his revolutionary approach including trumpeter Don Cherry, bassist Charlie Haden, and drummers Billy Higgins and Ed Blackwell.

Rather than following standard chord changes and repeating them each chorus, Coleman’s music often utilized just one chord center with the musicians soloing emotionally for as long or short as they wanted, without having to worry about bar lines and choruses; it would eventually be called “Free Jazz.”

Coleman (who recorded two albums while in Los Angeles), Cherry, Haden and Higgins all worked on a brief gig with pianist Paul Bley and then the Ornette Coleman Quartet headed for New York where they had a lengthy and sensational engagement at the Five Spot, inspiring the jazz world to debate about the merits of Coleman’s new music.

A set of recordings for the Atlantic label documented the group including Free Jazz which had Coleman utilizing a double quartet with both Higgins and Blackwell on drums, Haden and Scott LaFaro on basses, Don Cherry and Freddie Hubbard on trumpets/cornets, and Eric Dolphy added on bass clarinet.

Coleman was largely off the music scene during 1962-64 (disgruntled about the small amount of money that he was making) but he returned in 1965 with a new trio with bassist David Izenzon and drummer Charles Moffett that had Coleman playing some of his most rewarding alto solos and also occasionally switching to trumpet and violin.

His other units in the 1960s included quartets with tenor-saxophonist Dewey Redman and either Jimmy Garrison and Elvin Jones or Haden and Blackwell.

Ornette Coleman alternated between his electric band and acoustic projects during his final decades, never compromising his music and staying an influential force in advanced jazz, innovative to the end.

Here is a rare film of Ornette Coleman playing in Rome in 1974. 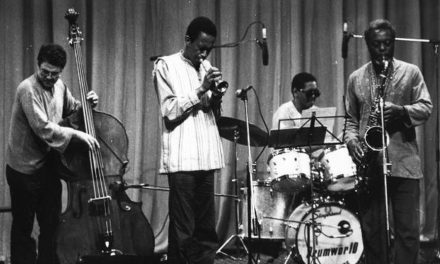