A tribute to one of the leaders of hot Chicago jazz

Albert Edwin Condon was born on November 16, 1905 in Goodland, Indiana.

Condon, who grew up near Chicago, started on the ukulele, switching to banjo and becoming a professional musician in 1921 when he was 15.

A fine rhythm player who almost never took solos (and none after the early 1930s), Condon became a guitarist by the late 1920s.

Considered one of the members of the Austin High Gang, a group of young musicians who learned from watching King Oliver’s Creole Jazz Band (which featured Louis Armstrong) and the New Orleans Rhythm Kings, Condon organized the McKenzie-Condon Chicagoans which in Dec. 1927 recorded four numbers that looked towards Dixieland of the 1930s.

He moved to New York in 1928, led several sessions, worked with Red Nichols’ Five Pennies (with whom he was filmed in 1929), and recorded with Louis Armstrong and Fats Waller

After making it through the Depression years, Condon co-led a group with clarinetist Joe Marsalis in 1936 and during 1937-38 was one of the leaders in reviving hot small group jazz, recording some classic sides for the Commodore label.

From then on, Eddie Condon was an important instigator in hot jazz, working regularly at Nick’s in New York, leading many record sessions in the 1940s and ‘50s, broadcasting regularly on the radio during 1944-45 in his famed Town Hall concerts (on which he led remarkable all-star bands), and running his Condon’s jazz club during 1945-67.

While he did not solo, Condon had a knack for counting off the perfect tempo for each song, was skilled at featuring his all-star cast at their best, and proved to be a witty and informative emcee.

He stayed active until the early 1970s and, although he did not care for the term Dixieland, he was one of its leaders for decades. 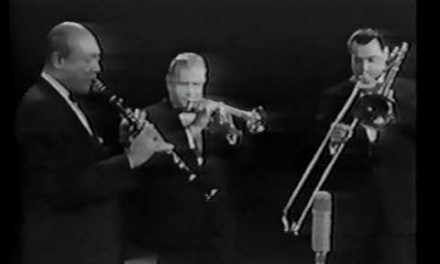