Mongo Santamaria is considered one of the greatest conga players of all time.

In addition to his technical skills, Santamaria was influential in the many types of music that he performed throughout his long career.

Santamaria worked with Tito Puente and Cal Tjader in the 1950s, led his own band by the end of the decade, composed “Afro Blue,” and made Herbie Hancock’s “Watermelon Man” into a standard.

At various times, Santamaria played traditional folkloric music, Afro-Cuban jazz, was a pioneer in the bugalu, recorded popular r&b-flavored albums, and ended up leading one of the best Latin jazz bands of the 1980s and ‘90s.

Here is Mongo Santamaria in action with his band in the late 1980s. 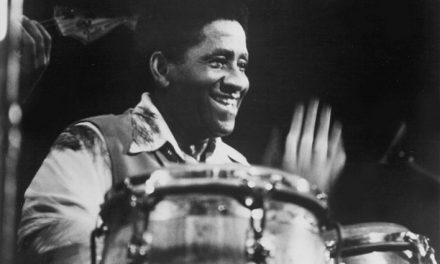