A tribute to the influential trumpeter and percussionist

Gonzalez’s father sang in Latin bands, his uncle was a guitarist, and his younger brother Andy Gonzalez is a bassist who has often worked in Jerry’s bands.

Jerry Gonzalez began playing trumpet when he was 12 and, inspired by Mongo Santamaria, he was soon doubling on conga.

He studied at New York City’s Music and Art High School and the New York College of Music.

Among Gonzalez’s early associations were working with Mongnito Santamaria (Mongo’s son), touring with the Beach Boys on trumpet, and playing conga with Dizzy Gillespie when he was 20.

He was a member of Eddie Palmieri’s band for four years, and worked with such notables as Manny Oquendo, Machito, Ray Barretto, Tito Puente, Paquito D’Rivera, Tony Williams, Archie Shepp and Woody Shaw.

In 1980 Jerry Gonzalez became a bandleader and in 1982 he formed the Fort Apache Band, an influential group that blended together post-bop jazz and Latin music, with Gonzalez switching between trumpet and congas.

Gonzalez, who also worked with Jaco Pastorius and McCoy Tyner, appeared in the film Calle 54, and in 2000 settled in Madrid where he has often fused together jazz and flamenco music.

Here is Jerry Gonzalez and his Fort Apache Band performing in 2010. 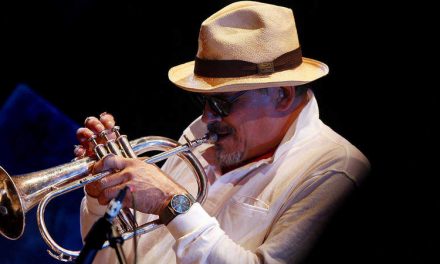