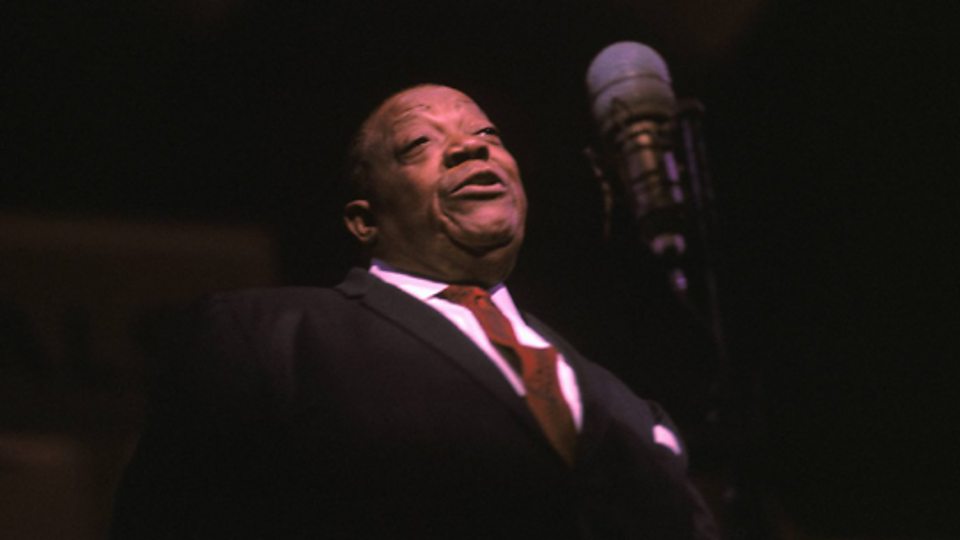 Jimmy Rushing appears on the “Jazz Casual” TV series in 1962.

As a high schooler, Rushing studied music with Zelia Breaux, an Oklahoma teacher famed for spreading jazz through the city’s segregated schools.

Rushing’s first big gig came in the mid-‘20s, when he sang with the self-titled “inventor of jazz,” Jelly Roll Morton.

Rushing is best known for singing with the Count Basie big band from 1935-1948. Afterwards, he found great success recording as a solo artist and with other bands.

He went on to join Walter Page’s “Blue Devils” in 1927 and would be among the group’s members absorbed by Bennie Moten’s “Kansas City Orchestra.”

After Bennie’s death in 1935, Jimmy Rushing who had become a top artist on the Kansas City scene went to work for the bandleader’s young understudy Count Basie.

He remained with the Basie Orchestra for the next thirteen years ending in 1948 when he retired for a time before organizing his own band and launching a highly successful solo career.

He made a number of television appearances and went on to tour Europe with Humphrey Lyttelton in 1958.

A year later Rushing was a featured guest on Duke Elligton’s “Jazz Party” album, followed by an entire record with the “Dave Brubeck Quartet” in 1960.

Jimmy Rushing was diagnosed with leukemia and died in New York City on June 8, 1972.