Born Apr. 4, 1939 in the KwaGuqa Township in Witbank, South Africa, Masekela was inspired to take up the trumpet when he was 14 after seeing the movie Young Man With A Horn.

He was part of the Huddleston Jazz Band (the first youth orchestra in South Africa), played in the musical King Kong in 1958 where he met his future wife singer Miriam Makeba, and in 1959 was a key member of the first African jazz group to record an Lp, the Jazz Epistles (which also included pianist Abdullah Ibrahim).

With the worsening of apartheid and the many riots that followed, Masekela left South Africa in 1960, moving to the United States.

While his roots were in jazz, Hugh Masekela also played music throughout his career influenced by his South African heritage, pop and rock.

In 1968 he had his biggest hit with “Grazing In The Grass” which sold four million copies.

Masekela, who toured with Paul Simon in the 1980s, collaborated with many South African artists and stayed active until shortly before his death from prostate cancer.

This extended live performance of “Grazing In The Grass” features Masekela on flugelhorn at a Mar. 24, 2014 performance from the Kuumbwa in Santa Cruz, California. 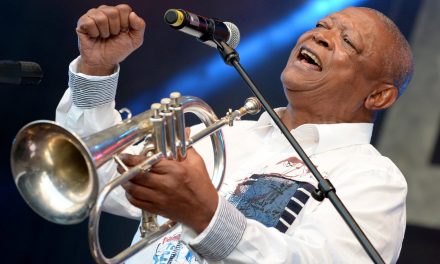