Some hot jazz from the famous clarinetist

Pete Fountain (1930-2016) symbolized the New Orleans clarinet throughout much of his life.

A native of New Orleans who played with the Basin Street Six (featuring trumpeter George Girard) and the Dukes of Dixieland during the first half of the 1950s in addition to co-leading a band with Al Hirt, Fountain gained national fame when he was featured on a song or two during most episodes of the Lawrence Welk Show during 1956-58.

After leaving Welk, Fountain returned to New Orleans, recorded many rewarding albums for the Coral label, had his own night club, and played the New Orleans Dixieland music that he loved throughout his long career.

Fountain’s clarinet style was influenced by his two favorite clarinetists (Benny Goodman and Irving Fazola) and remained virtually unchanged throughout his career.

Here is Pete Fountain at the end of a 1992 television special, jamming “Struttin’ With Some Barbeque” with his regular band (trumpeter Jimmy Weber, Tom Gekler and Mike Genevay on trombones, pianist Bob Molinelli, bassist Oliver Felix, and drummer Charlie Lodice); Molinelli and Weber have solos but Pete Fountain is the main star, clearly enjoying himself. 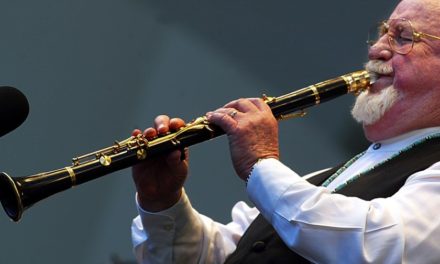