A birthday tribute to the pioneering jazz guitarist

Eddie Lang started on the violin when he was seven, studying it for 11 years and working professionally during 1917-19.

But by 1920, Lang had switched to banjo, his main instrument until 1924 when he largely switched to guitar.

A member of Red McKenzie’s popular Mound City Blue Blowers during 1924-25, Lang was soon discovered and became very busy as a freelance guitarist.

While not the first jazz guitarist (Nick Lucas had recorded a pair of unaccompanied guitar solos in 1922), Lang’s brilliance helped lead the guitar towards replacing the banjo altogether.

A virtuoso who was a masterful accompanist to both singers and ensembles in addition to being a fine soloist, Lang was in great demand for recordings, studio and radio work, and live performances throughout his brief life.

Lang often teamed up with his childhood friend violinist Joe Venuti on record dates including sessions with Roger Wolfe Kahn (1926-27) and Jean Goldkette, and they were members of the Paul Whiteman Orchestra during 1929-30; Venuti and Lang also recorded as a duet and with Venuti’s Blue Four.

In addition to a pair of classic guitar duets with Carl Kress, Lang recorded 20 selections as a leader during 1927-29, many of which showcased his guitar being accompanied by a pianist.

Eddie Lang stayed busy during the early years of the Depression and in 1932 he became Bing Crosby’s regular accompanist.

But tragically Lang died in 1933 due to complications resulting from a botched tonsillectomy; he was just 30.

Here is one of Eddie Lang’s rarer movie appearances, appearing in a scene with singer Ruth Etting from her 1932 short A Regular Trouper, performing “Without That Man.” 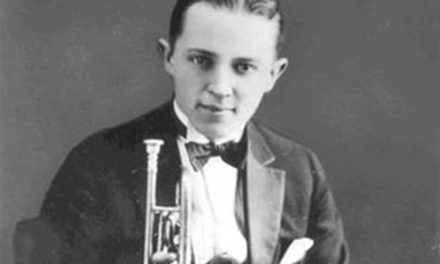