A tribute to the jazz pianist-singer

While serving in the Navy, he won a talent contest as a singer which resulted in an appearance on the Ed Sullivan Show in 1956.

After his discharge, McCann formed a trio in Los Angeles, turning down a chance to join the Cannonball Adderley Quintet so he could work on his own solo career.

McCann signed with the Pacific Jazz label and, starting in 1960, became well known as an influential and funky soul jazz pianist who had a sound of his own.

Les McCann recorded a hit album at the 1968 Montreux Jazz Festival (Swiss Movement), a spontaneous set with his trio, tenor-saxophonist Eddie Harris and trumpeter Benny Bailey that included his classic vocal on “Compared To What” and the soulful instrumental “Cold Duck Time.”

From that point on, McCann emphasized his singing and his music generally became soul-oriented although he continued playing piano and, by the 1970s, electric keyboards.

Since suffering a stroke in the mid-1990s, Les McCann has been less active although his singing has stayed strong and he retained his popularity.

Here is the famous version of “Compared To What” which was fortunately filmed. 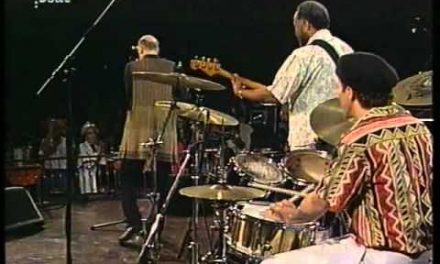