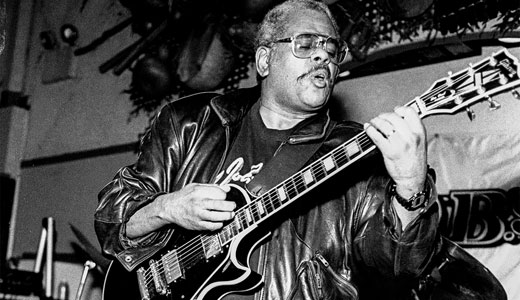 At only 26, Sharrock appeared on the Pharoah Sanders LP Tauhid. Soon after, he joined flautist Herbie Mann’s group.

In 1960 Sharrock took up playing guitar instead of a saxophone or horn due to his asthma and would go on to attend the Berklee College of music for a time.

In late 1966 after leaving school he made his recording debut with an appearance on Pharoah Sanders’ “Tauhid” LP remaining with Sanders for the next two years.

One of the first guitarists to attempt free jazz, he released three albums under his own name in the late ‘60s and early ‘70s.

In the ‘80s, Sharrock worked with avant-garde jazz and rock groups Last Exit and Machine Gun.

His most highly regarded work is his last album, 1991’s Ask the Ages.

After joining Herbie Mann’s band, Sonny Sharrock recorded his first album’s as leader, “Black Woman” (1969) and “Monkey-Pockie-Boo” (1970) both featuring the wordless vocals of his wife Linda.

After leaving Mann’s group Sonny turned down an audition with Miles Davis resulting in years spent in obscurity until he was invited to join the jazz fusion supergroup “Last Exit” in 1986.

Unfortunately just as he was beginning to build a new young fan base, Sonny Sharrock died unexpectedly from a heart attack on May 26, 1994.

Sonny Sharrock appears on German TV in 1986 as a member of “Last Exit”.