In September, the Fania All-Stars with their newest member, Celia Cruz, got on a plane to Zaire to play a huge music festival scheduled in Kinshasa around Muhammad Ali’s fight with George Foreman, the much ballyhooed “Rumble In The Jungle.” The festival would be headlined by Soul Brother #1, James Brown, and broadcast around the world, along with the match.

Unfortunately, as the musicians found out in-flight, Foreman got injured in training, and the fight had to be postponed — for an entire month, it turned out. But the music festival went on as planned. It was filmed, and although it wasn’t broadcast after all, the footage finally surfaced in the 2009 documentary Soul Power.

This is an outtake: Celia Cruz, with Johnny Pacheco, Ray Barretto, Larry Harlow, and Héctor Lavoe, rehearses the folk song “Guantanamera”— about a peasant girl from Guantánamo — in an empty stadium. They turn it into a pan-cultural anthem: Afro-Cuban music going home for a long-overdue visit.

– From the SUPREMELY EXCELLENT book on the amazing music scene in New York City of 1973-1977 – Love Goes To Buildings On Fire (Farrar, Straus & Giroux/Faber & Faber). 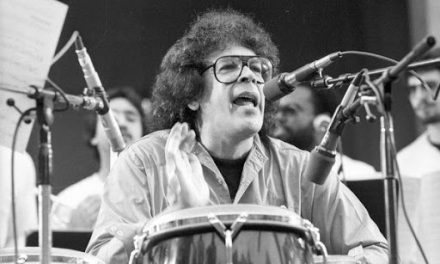