A tribute to the legendary trumpeter and singer

Trumpeter and singer Chesney “Chet” Baker was born on December 23, 1929 in Yale, Oklahoma.

Baker grew up in the Los Angeles area, taking up the trumpet when he was 13.

He played in school groups, spent time playing in an Army band, and in 1952 won an audition to play with Charlie Parker who was visiting Los Angeles.

As a member of Gerry Mulligan’s pianoless quartet during 1952-53, Baker made history; his soft sound and emphasis on the middle register of his horn worked perfectly with Mulligan and symbolized West Coast “cool jazz.”

After the group broke up, Baker put together his own quartet with pianist Russ Freeman, began to sing romantic ballads, and became a matinee idol.

A lifelong heroin habit kept Chet Baker from becoming a movie star (he had been considered for a major part in a Hollywood film) and would serve as a constant hindrance in his career but he played quite well throughout the 1950s.

Baker was based in Europe during much of 1959-64, alternating periods of musical activity with jail terms after he was busted for possession of drugs.

While Chet Baker (who had begun doubling on flugelhorn) played very well on five albums recorded in 1965, the following year he had his teeth knocked out by drug dealers, recorded a few poor albums, and had a period of struggle.

Against all odds, he made a major comeback by 1973, moving to Europe two years later and often playing at his very best in the 1980s despite his nomadic lifestyle.

His Hollywood good looks were gone but Chet Baker was at his playing prime in his last years which ended when he fell (or was pushed) out of a second story window in Amsterdam in 1988, finishing his strange life as jazz’s anti-hero.

Here is Chet Baker in 1985 performing “Love For Sale.” 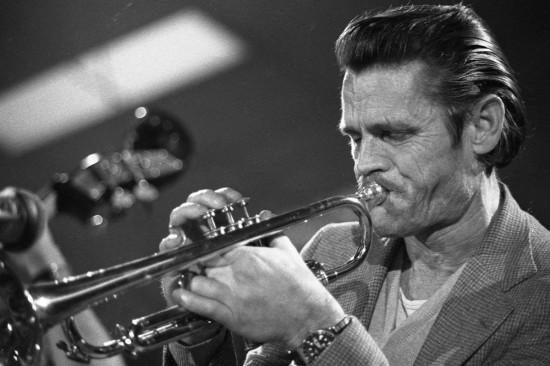 You Don’T Know What Love Is