A tribute to the unique reed player

After a brief period in Ohio, he moved with his family to Detroit where his father changed their last names to Evans; yes, Yusef Lateef for a time was known as Bill Evans.

Lateef became a skilled alto-saxophonist and played with many of the greats who lived in Detroit during the era including Milt Jackson, Paul Chambers and Elvin Jones.

After working with swing bands, he switched to the tenor and spent 1949 as a member of the Dizzy Gillespie Orchestra.

After that big band broke up, Lateef (who had already changed his name) returned to Detroit and studied flute.

In 1957 he emerged on the national scene, recording for Savoy and New Jazz on tenor, flute and oboe, and utilizing some instruments from India and China while also playing bebop, blues and ballads.

Lateef was innovative in stretching jazz to include influences from other countries.

In 1963 he was a member of the Cannonball Adderley Sextet, an association that uplifted that band and added to his own prominence.

Lateef led a series of recordings for the Impulse and Atlantic labels and never seemed content to stand still, always studying music and staying open to outside influences from other countries.

In his later years, starting in the mid-1980s, Lateef’s music could be considered New Age or World Music in its emphasis on peaceful moods but he never lost his abilities and stayed a vital force up until his death at the age of 93.

Here he is at age 85 playing Metaphor with a 13-piece group that includes Stephane Belmondo on bugle and pianist Laurent Fickeison. 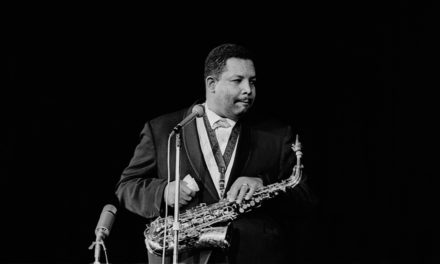