Woody Herman started performing quite young, working as a tap dancer and singer in vaudeville as a child before taking up the alto sax at 11 and the clarinet when he was 14.

After working with the bands of Myron Stewart, Joe Lichter, Tom Gerun (1929-34), Harry Sosnick and Gus Arnheim, Herman became a featured soloist and singer with the Isham Jones Orchestra in 1934.

When Jones broke up the band in the summer of 1936, the 23-year old Herman used the group’s nucleus to form his own orchestra; he would be leading a big band for most of the next 51 years.

After a period of struggle, he had a hit in 1939 with “Woodchopper’s Ball” and his big band became known as “The Band That Plays The Blues.”

During 1944, Herman reorganized his group which soon became nicknamed “The Herd” (and later “The First Herd”), playing often-rambunctious music that fell between swing and bop.

The band became so popular that even Igor Stravinsky noticed, composing “Ebony Rhapsody” for the orchestra.

After the group broke up, a year later Herman formed ‘The Second Herd” which also became known as “The Four Brothers Band” due to the popularity of the song “Four Brothers.”

The Second Herd played a cool-toned version of bebop and featured such greats as tenors Stan Getz, Zoot Sims and Al Cohn plus baritonist Serge Chaloff.

In the 1950s Herman led “The Third Herd” which was a more laidback version of his two earlier Herds, and in the 1960s he had one of his most exciting groups, “The Young Thundering Herd,” which featured tenor-saxophonist Sal Nistico, trombonist Phil Wilson and trumpeter Bill Chase.

Always wanting to avoid nostalgia and perform new material, Woody Herman remained an inspiring force to his sidemen and the music world, leading his big band up until the time of his death in 1987.

Here is the Woody Herman Orchestra playing “My Favorite Things” in Montreal in January 1964. 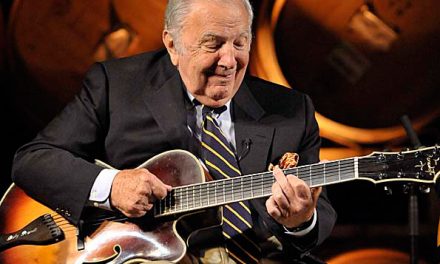