One of my favorite musicians, the long unheralded, forgotten trumpet virtuoso, composer, arranger, bandleader Don Ellis, who was the most futuristic jazz musician who has ever lived.

I first saw Don on PBS TV live from Tanglewoood and on a Leonard Bernstein Young People’s Concert when I was a kid. Blew my mind. He combined jazz, Afro-Cuban, Brazilian, Bulgarian, East Indian, Greek rhythms and more world rhythms, as well as electronics, stagecraft, in an incredibly creative entertaining, artistic way. Here he plays his own composition, Pussy Wiggle Stomp. It’s basically a hoe down with mambo rhythm, funk, and more in 7/4 time. 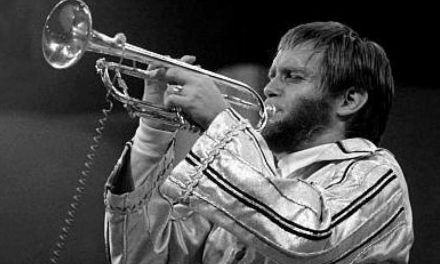