During the ‘30s, he played with Jelly Roll Morton, Benny Carter, Cab Calloway, and other giants of swing music.

In the second half of the video you can see drumming great Gene Krupa doing some solos opposite Cole — both in rehearsal and in the final broadcast.

This video should dispell stereotypes that rock artists were originators of “match grip,” in which both sticks are held overhand. 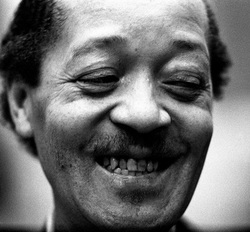