The innovative bassist is remembered

Pettiford grew up singing and dancing in the family band before switching to piano at 12 and settling permanently on the string bass two years later.

He worked with the Charlie Barnet Orchestra in 1942 (when Barnet had two bassists including Chubby Jackson) and then became well known in the jazz world in 1943 when he worked, recorded, and appeared on film with Coleman Hawkins.

One of jazz’s first major bass soloists (Jimmy Blanton was one of the few who preceded him), Pettiford was widely respected and utilized by both the bop and swing worlds, playing with the who’s who throughout the 1940s.

In addition to recording with Earl Hines and Ben Webster, he co-led a group with Dizzy Gillespie in 1943, was a member of the Duke Ellington Orchestra during 1945-48, and was with Woody Herman’s big band in 1949 in addition to appearing on many bop record dates.

Pettiford was primarily a bandleader in the 1950s, sometimes doubling on cello where he was the second jazz cellist after Harry Babasin.

Oscar Pettiford moved to Copenhagen in 1958, working with Bud Powell and a variety of top European musicians

Oscar Pettiford rarely appeared on film but here is a rare duet version of his ballad “The Gentle Art Of Love” with guitarist Attila Zoller in 1959. 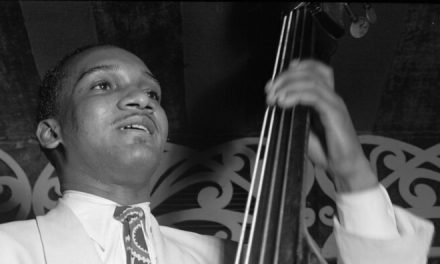