A tribute to the inventive pianist

A superior pianist with her own sound since at least the late 1960s, in 2018 Joanne Brackeen was made a Jazz Master by the National Endowment of the Arts, along with Dianne Reeves, Pat Metheny and Todd Barkan.

The award was long overdue for Brackeen has been making creative and colorful music for the past half-century.

Actually Brackeen (who was born in 1938) has been playing jazz since the 1950s, gaining early experience with Dexter Gordon, Teddy Edwards and saxophonist Charles Brackeen who she married in 1965.

In addition to leading her own trios, Brackeen was the first female member of Art Blakey’s Jazz Messengers and had important stints with Joe Henderson (1972-75) and Stan Getz (1975-77), excelling in every setting.

Sometimes thought of as an avant-garde player because of her original style, Brackeen is also a superior interpreter of standards.

This solo piano version of “Bewitched, Bothered and Bewildered” is from the 1988 Jazz Ost-West Festival in Nurnberg, and shows why Joanne Brackeen is an NEA Jazz Master. 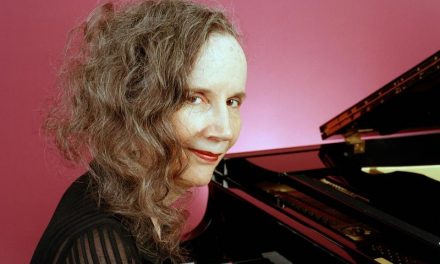