Trumpeter and bandleader Walter Maynard Ferguson was born May 4, 1928, in Montreal, Quebec.

Ferguson was a child prodigy who quit school at 15. He played with a young Oscar Peterson before moving to the U.S. in 1948. He made his name as a “screech” trumpeter with Stan Kenton.

In 1956, he formed the first of several large ensembles. In 1978, his recording of “Gonna Fly Now” made the Top Ten. Band alumni include Chick Corea, Slide Hampton and Wayne Shorter.

He went on to study at the Conservatoire de musique du Québec à Montréal beginning in 1943.

Receiving attention from American musicians after graduating in 1948 he immigrated to the U.S. that year intending to join Stan Kenton’ disbanded band group.

Unable to perform under Kenton at the time he busied himself with other bands including those of Jimmy Dorsey and Charlie Barnet.

When Stan Kenton formed his nineteen-piece jazz orchestra in 1950 Maynard got his chance to work with the director playing third chair trumpet, notably featured on the recordings “What’s New?”, “Invention for Guitar and Trumpet”, and “The Hot Canary.”

After work as a session musician for Paramount Pictures during which he became dissatisfied with the total lack of live performance opportunities, Maynard began leading the house band at Morris Levy’s Birdland jazz club in New York, the “Birdland Dream Band” in 1956.

He moved to Millbrook, New York in November 1963 and went to lived on the notorious Hitchcock estate with Dr. Timothy Leary where he experimented with LSD, releasing several albums.

In 1967 he left relocating to India before metalizing as the leader of a successful big band featuring electronic instruments in London two years later.

Maynard Ferguson downsized with the formation of a electronica-fusion septet during the mid-1980s before returning to the large band format with his nine-piece group “Big Bop Nouveau.”

Maynard Ferguson is featured at the “Canadian Stage Band Festival.” 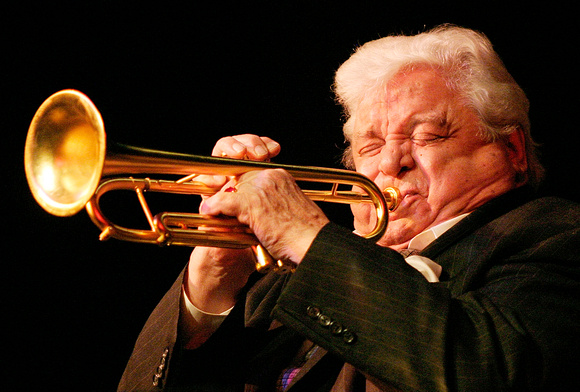