Snooks Eaglin was born Fird Eaglin Jr. on January 21, 1936 in New Orleans. Not long after his first birthday he lost his sight after being stricken with glaucoma, and spent several years in the hospital with other ailments. Around the age of five Eaglin received a guitar from his father and taught himself to play by listening to and playing along with the radio. A mischievous youngster, he was given the nickname “Snooks” after a radio character named Baby Snooks.

In 1947, at the age of 11, Eaglin won a talent contest organized by the radio station WNOE by playing “Twelfth Street Rag”. Three years later, he dropped out of the school for the blind to become a professional musician. In 1952, Eaglin joined the Flamingoes, a local seven-piece band started by Allen Toussaint. The Flamingoes did not have a bass player, and according to Eaglin, he played both the guitar and the bass parts at the same time on his guitar. He stayed with The Flamingoes for several years, until their dissolution in the mid-1950’s.

As a solo artist, his recording and touring were inconsistent, and for a man with a career of about 50 years, his discography is rather slim. His first recording was in 1953, playing guitar at a recording session for James “Sugar Boy” Crawford.

Generally regarded as a legend of New Orleans music, Eaglin played a wide range of music within the same concert, album, or even song. In his early years, he also played some straight-ahead acoustic blues. This ability to play a wide range of songs and make them his own earned him the nickname “the human jukebox.” Eaglin claimed in interviews that his musical repertoire included some 2,500 songs.

For many years, Eaglin lived in St. Rose in the suburbs of New Orleans with his wife Dorothea. Though he did not play many live shows, he regularly performed at Rock n’ Bowl in New Orleans, and also at the New Orleans Jazz and Heritage Festival. 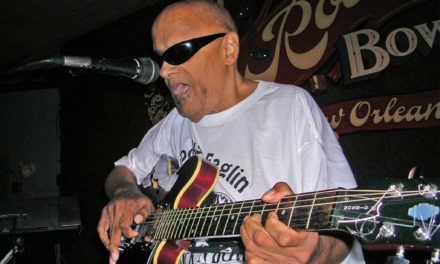