A rousing version of “Swing That Music”

The always-exciting Wycliffe Gordon has had a major career ever since gaining exposure in the 1990s with the Wynton Marsalis Septet.

On Mar. 4, 2015, he appeared at a benefit in Dallas with the University of North Texas One O’Clock Lab Band, directed by Jay Saunders.

On “Swing That Music,” a song made famous by Louis Armstrong in the mid-1930s, Gordon leads the orchestra through an uptempo version.

Wycliffe Gordon sings and scats, takes a solo on the rarely-used soprano trombone (sounding a bit like a slide trumpet), and there are spots for trumpet, baritone sax and drums before some hot boppish ensemble choruses drive the rousing piece to its conclusion. 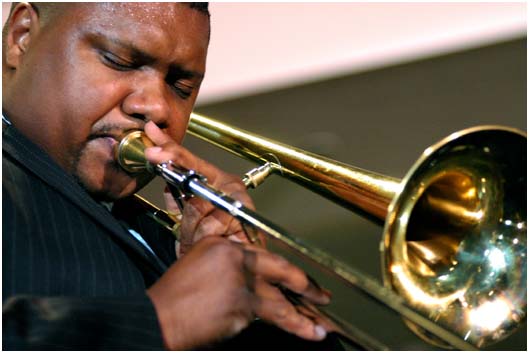