Barney Kessel (October 17, 1923 – May 6, 2004) was an American jazz guitarist born in Muskogee, Oklahoma, USA. He was a member of many prominent jazz groups as well as a “first call” guitarist for studio, film, and television recording sessions. Kessel was a member of the group of session musicians known as The Wrecking Crew.

Kessel began his career as a teenager touring with local dance bands before moving on to bands such as that led by Chico Marx. He quickly established himself as a key post-Charlie Christian jazz guitarist. In 1944 he participated in the film Jammin’ the Blues, which featured Lester Young, and in 1947 he recorded with Charlie Parker’s New Stars on the Relaxin’ at Camarillo session for Dial Records. He is featured on the compilation Charlie Parker on Dial. He was rated the #1 guitarist in Esquire, Down Beat, and Playboy magazine polls between 1947 and 1960.

Barney Kessel is known for his innovative work in the guitar trio setting. In the 1950s, he made a series of albums called The Poll Winners with Ray Brown on bass and Shelly Manne on drums. He was also the prominent guitarist on Julie London’s definitive recording of “Cry Me a River”. Also from the 50s, his three Kessel Plays Standards volumes contain some of his most polished work.

Kessel was also a member of the Oscar Peterson Trio with Ray Brown for a year, leaving in 1953. The guitar chair was called the hardest gig in show business since Peterson often liked to play at breakneck tempos. Herb Ellis took over from Kessel. Kessel also played with Sonny Rollins in the late 50s and can be heard on the Sonny Rollins And The Contemporary Leaders album on songs like “How High the Moon”.

A “first call” guitarist at Columbia Pictures, during the 1960s Kessel became one of the most in-demand session guitarists in America, and is considered a key member of the group of first-call session musicians now usually known as The Wrecking Crew. In this capacity he played on hundreds of famous pop recordings including albums and singles by Phil Spector, The Beach Boys, The Monkees and many others. He appeared in an acting part playing a jazz guitarist named “Barney” in one episode of the Perry Mason TV show. He also wrote and arranged the source music, including a jazz version of “Here Comes the Bride”, provided by the jazz combo that figured in the story.

In 1961 The Gibson Guitar Corporation introduced The Barney Kessel model guitar onto the market and continued to make them until 1973.

One custom instrument Kessel played was essentially a 12-string guitar neck attached to a mandolin body (similar to Vox’s mando guitar), which may have been played on the intro to The Beach Boys’ “Wouldn’t It Be Nice.”

During the 1970s, Kessel presented his seminar ‘The Effective Guitarist’ in various locations around the world.

Kessel’s sons David and Daniel also became session musicians, working with Phil Spector during the 1970s. He was married to B. J. Baker.

On Pete Townshend’s 1983 album “Scoop”, Townshend paid homage to the guitarist with the instrumental song “To Barney Kessel”.

Kessel released several solo albums even late into his life.

Kessel died of a brain tumor in San Diego, California. He had been in poor health after suffering a stroke in 1992. 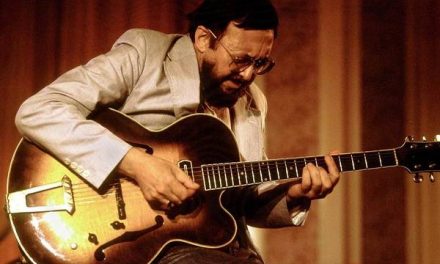